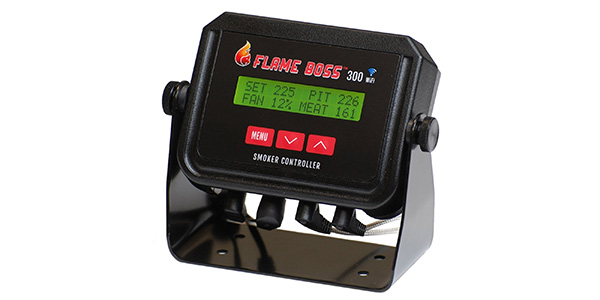 For years now there has been a single dominant name in the automatic temperature controllers market – BBQ Guru. Other models like the Stoker, Pitmasters IQ range and of course Flame Boss have been good alternatives but never caught on quite like BBQ Gurus range. We expect that to change with the new Flame Boss 300.

What’s Included with the Flame Boss 300

The adapters will differ depending on which version you buy. If you have a Kamado of any sort, such as the Kamado Joe, then the Kamado Smoker Controller will be the one for you.

If you have any other type of smoker, like a Weber Smokey Mountain, then get the Universal Smoker Controller.

Included are multiple high temperature probes that are rated up to 575°F. They worked very well in our experience and were precise and quick to adjust. With the use of some additional Y-cables and meat probes you’re able to use up to three meat probes and one pit probe at a time. This is a brilliant feature that allows you to cook several cuts of meat at once.

The Flame Boss has the clearest display of any temperature controllers we’ve tried. The screen can show food temperature, pit temperature, the chosen temperature, and the fan speed. It’s simple but easy to read and gives the data you want simply and efficiently. There’s not need to scroll through page after page to get the information you want.

Included with every Flame Boss 300 is the ability to view graphs of your cooks on an online dashboard. You can monitor pit and food temperature and change the temperature of your pit from your phone, tablet or computer. There’s also a feature that allows you to set the meat alarm to automatically turn down the pit temperature when your desired meat temperature is reached to keep food warm. All of this is available to any device that has a web browser. Accessing it through a web browser is brilliant as it allows you to access your data from virtually any modern smart device. If you prefer apps, then there is now an available iOS and Android app that has even more features available.

It has an automatic learning PID controller. We’re not quite sure how the automatic learning part of it works, and still couldn’t figure out if it’s a gimmick or not. But Flame Boss claim that it learns how your smoker works for quicker and smoother temperature control. Since the Flame Boss 300 works so well we assume that this works how they claim, so we’ll go ahead and say it’s a very good feature.

The Flame Boss comes with a blower that is capable of variable speeds. This is a huge improvement over the blowers from other companies and helps the Flame Boss to keep such precise temperatures.

An open lid feature detects the sudden temperature drop from opening the lid and turns the fan off temporarily to avoid over-stoking the fire. This is a great feature that is unfortunately missing on cheaper models such as the BBQ Gurus PartyQ, but Flame Boss have you covered on this with their entire range.

There are a vast array of alarms and safety features to keep your cook as simple and safe as possible. The timer alarm reminds you when to perform the next step in your recipe. The meat temperature alarm will send alerts to your smartphone when your meat has reached the desired temperature. The pit temperature alarm will notify you if the temperature in the pit gets too hot or cold.  There is also a power glitch save feature. This is where the set temperatures are saved in the controller even if the power is cut. So, if someone knocks the power cord and the Flame Boss turns off, you won’t lose all your data and when it’s plugged back in you’re able to pick up from where you left it.

The build quality is generally fantastic. It’s made from a solid plastic that feels sturdy and solid. It includes a handy stand that is allows you to change the viewing angle and mount the Flame Boss in various locations. This feels solid and has a nice finish. The probes are the stand out feature here, though. They are made from an industrial duty platinum and can easily with stand the high temperatures and beatings from being used in Kamados or other smokers.

Overall, the design is fine. It’s not particularly good looking but it’s very practical and you can tell a lot of care and attention has been put into making it easy to use. The screen and the three buttons are very simple and allow anyone to work it with little trouble.

The Flame Boss 300 features one mode. Automatic. You simply attach the blower, plug in the various probes and connectors, set your temperature and it’s ready to go. It really is that easy. The actual controller is fairly self-explanatory and only has three simple buttons so isn’t overwhelming you with hundreds of options and buttons. This is exactly how it should be and it works very well. If you can’t figure it out on your own the manual will explain everything.

How Well does the Flame Boss 300 Work?

All the fancy features and ease of use of the Flame Boss mean nothing if it can’t maintain a steady temperature. Luckily the Flame Boss works amazingly well and can hold any temperature you want it to for hours on end. A lot of this is due to the variable speed fan. The software and the fan working together can make very precise incremental increases or decreases to maintain the temperature you want. It’s brilliant being able to completely forget about it and let the technology do all the work.

The Flame Boss 300 is a brilliant piece of technology. It works better than expected and is super easy to use. We even grew to love the WiFi features and the graphing. Initially we thought this would be a bit of a gimmick but in time we found ourselves both gathering around the iPad to watch the temperatures. It’s ironic that this device is meant to reduce the time spent obsessing over what’s smoking, when in reality we think we’ve spent more time! I mean, look at all that data.

In all seriousness, if you’re looking for a way to vastly improve your smoking experience then we’d highly recommend picking up a Flame Boss 300. It is fairly expensive, generally it’s sold at over $300, but you have to think of it as an investment. It’ll save you a lot of time in the long run, especially if you’re doing a lot of smoking. And best of all you’ll have a brilliant new gadget to show off to all your friends.

The Flame Boss 300 performed equally as well on our list of the best automatic temperature controllers.

For a long time, you’d simply go for the better known CyberQ. But then the Flame Boss 300 came out and gave BBQ Guru a scare because of how well it worked. So, BBQ Guru came back with the CyberQ Cloud and things got very interesting.

In all honestly, they work very, very similarly. You’re going to be getting a brilliant temperature controller either way that will make your smoking so much easier that you’ll wonder how you ever lived without it. At the end of the day, it really depends on what you want from your automatic temperature controller as to which one we would recommend.

Check out our review of the BBQ Guru CyberQ Cloud here.

Here are a few differences.

The BBQ Guru CyberQ Cloud just about wins on compatibility as it has a huge backlog of adapters for almost every smoker on the market. If you’re using a smaller brand smoker or even your own ugly drum smoker then the chances are that the CyberQ Cloud is going to work with it. But, Flame Boss’s universal adapter is said to work on a lot of other models so this is closer matched than first though.

Getting your automatic temperature controllers connected to WiFi is now easier than ever. We found the process on the Flame Boss to be quicker and simpler, but the CyberQ Clouds process wasn’t for rocket scientists. It comes with a very helpful quick start guide that takes you through the entire process. Just as easy, but a bit more to do than the Flame Boss.

Both temperature controllers manage to maintain very precise temperatures but we’ve found that the Flame Boss is more consistent. This is probably due to the variable speed fan, which also runs a bit quieter than the Pit Viper on the CyberQ. You’ll be looking at a 1-3 degree variation from the desired temperature for both controllers, which is a minuscule fluctuation.

With a quick search, you’ll be able to find the Flame Boss cheaper as well.

Overall, whichever you end up buying you’ll be getting a brilliant product, but if you want a straight answer as to which we would recommend, it’d be the Flame Boss 300. 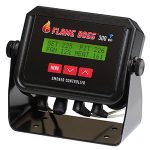 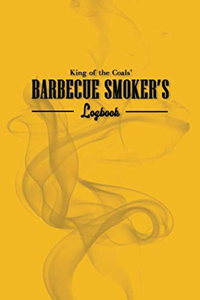